Monday evening about sunset, I walked down the road from our cabin amid snow squalls and bitter northwest winds to an opening in the woods.  For the past ten years, I have been coming here to this meadow in spring to observe the woodcock's sky dance.  It was cold standing there in the wind and snow, and I had almost given up and turned around for home when I heard a peent.  The woodcock started slowly, but as the sky darkened, his peents increased in frequency and then he lifted up into the air and climbed in tight circles and performed his song and dance.  In a matter of minutes, I could hear three separate woodcock peenting and dancing.  I watched until I could no longer see the birds against the darkening sky and then walked home feeling quite warm. 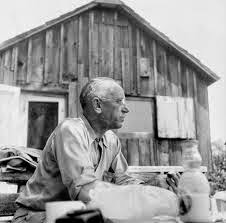 I know of no better description of the male woodcock's courtship ritual than Aldo Leopold's in A Sand County Almanac: "Suddenly the peenting ceases and the bird flutters skyward in a series of wide spirals, emitting a musical twitter.  Up and up he goes, the spirals steeper and smaller, the twittering louder and louder, until the performer is only a speck in the sky.  Then, without warning, he tumbles like a crooked plane, giving voice in a soft liquid warble that a March bluebird might envy.  At a few feet from the ground he levels off and returns to his peenting ground, usually to the exact spot where the performance began, and there resumes his peenting."
Like Leopold, since I have observed the sky dance, I no longer shoot as many woodcock as I once did.  I can't imagine spring without dancing woodcock.
Posted by Unknown at 4:50 PM