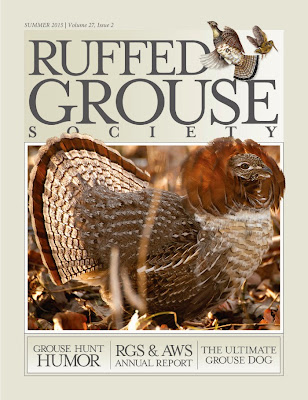 See the summer RGS issue for a sneak peak at some Hannah Stonehouse Hudson bird dog photography. Even though I'm hopelessly biased toward the three photos of Fergus, my favorite is the GSP (I think) going for a cracker.  Hannah captures not only the moment of the hunt, but those before and after.
Posted by Unknown at 6:19 AM No comments: 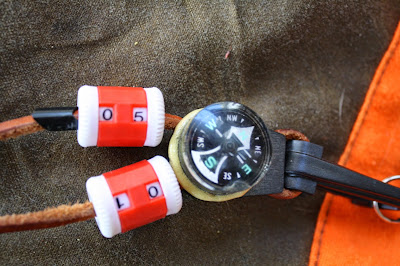 May 13, 2015 -- frost overnight, clear blue skies this morning.  Went out with Tom Goltz to the 2 Km Cover, and we ran Fergus, his first attempt at banding.  As we gathered our gear in the parking lot, we could hear a grouse drumming to the east, an auspicious start.  I left the camera in the truck so I could concentrate on controlling Fergus.

Fergus pointed five woodcock and one grouse in about an hour and a half.  The first two woodcock were males, but then he pointed a brooding hen.  After flushing the hen, I grabbed Fergus and tied him to a tree.  I went back to where the hen flushed and crouched down, and in a few moments I spotted a little fuzzy woodcock.  It was within arms reach but didn't flinch.  Tom worked a circle around me, looking for chicks, and then I found two more in short order.  We looked several more minutes for the fourth, but never found it.  Their beaks were 21 mm, so they were two or three days old.  With Tom's help, and Fergus waiting patiently at his tree, I banded the three chicks, and he released them.

On the way out, Fergus pointed a grouse and two more woodcock, the last a chick that could fly. Two weeks old and already flying.  Precocious little birds.  For the season, Tom has banded 37 chicks, two more than his previous all-time high of 35.
Posted by Unknown at 4:57 PM No comments:

It's that time of year -- spring clean-up time.  After the snow melts and before the grass starts to green up, one of us has to grab the shovel and remove the winter deposits.  Much of our one acre is wooded, and the setters have learned to do their business in the trees.  But every once in a while, they leave me a little something to scoop up.  Which is OK, it's just part of part of owning a dog.

My mother's next door neighbors own three large dogs, and their house, situated on a postage-sized lot, is literally ten feet away from hers.  Not in tune with property lines, their dogs often leave her deposits, which she rightfully deplores.  I told her to collect them all in a bag, and when the bag is full, walk next door and ring the doorbell.  When they answer the doorbell, hand them the bag and say, "Here, I believe these are yours."  One of my former colleague's mother actually did this -- with a straight face if I remember.  It would probably be more neighborly to call these guys listed above.

Posted by Unknown at 2:50 PM No comments: 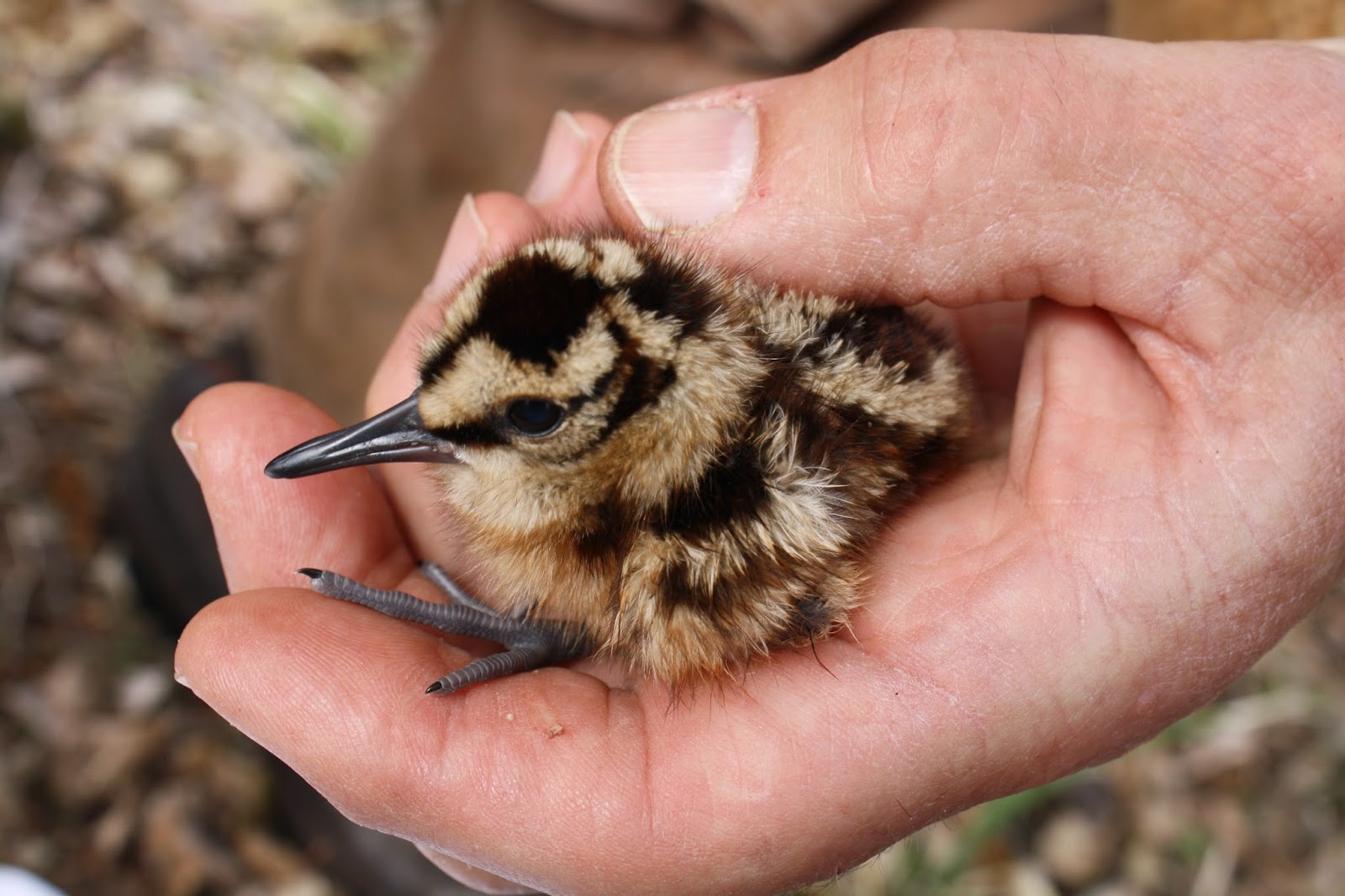 On May Day, I went out looking for woodcock broods with Wisconsin-licensed bander Tom Goltz and his five-year-old Brittany named Ivy.  Tom's English setter Ruby had pointed two broods the day before, and he had banded six chicks, so we were hoping for more success, particularly me since this was my first go at banding.  We didn't start until one o'clock, giving the morning over to the turkey hunters, but despite temps in the mid-60s, it was a fine day to be in the woods with the spring wildflowers blooming: hepatica, bloodroot, trout lillies, even a few small trillium. 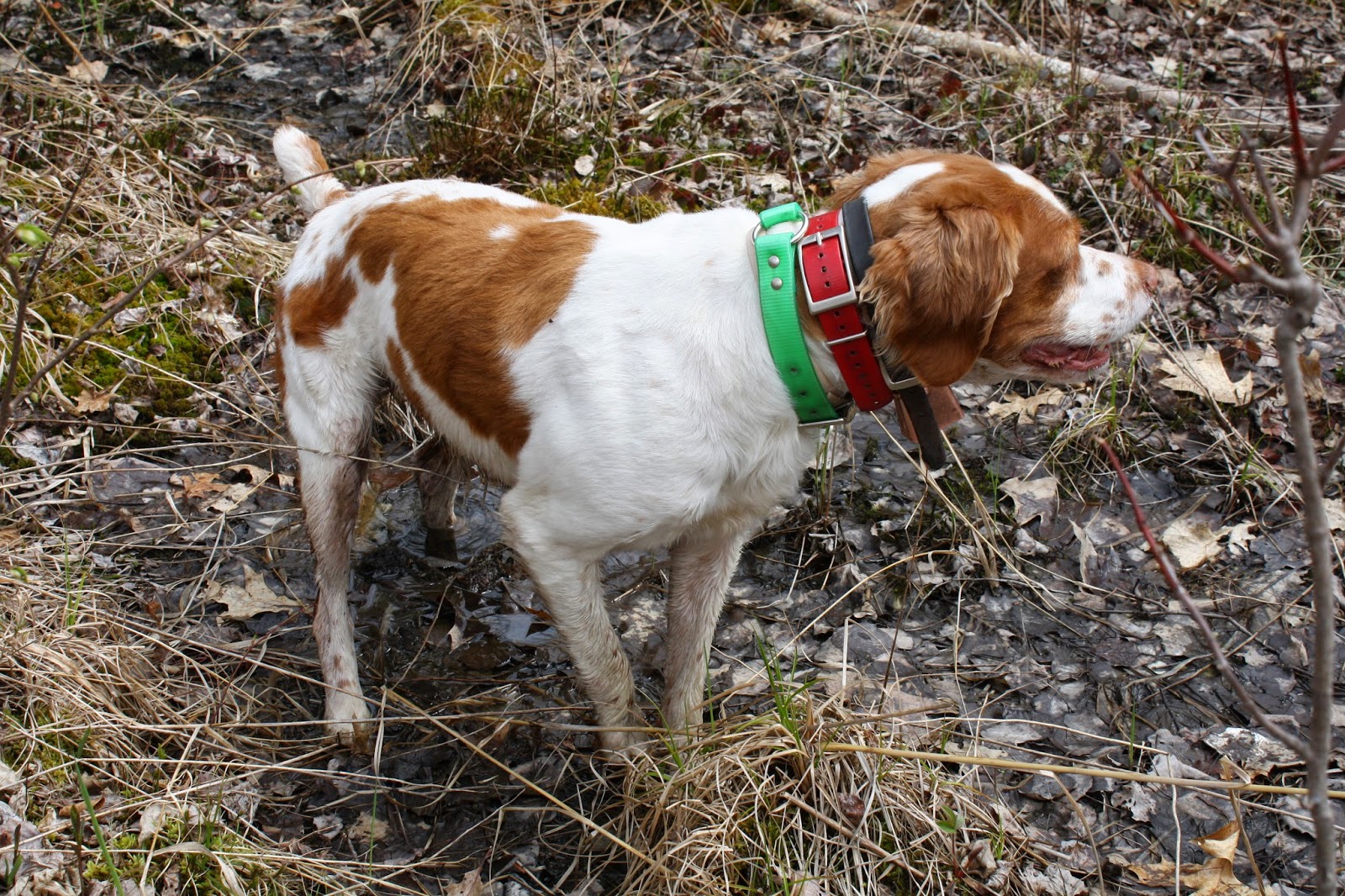 We worked a low swampy section of tag alder and popple in the county forest, where Ivy pointed our first woodcock, a male which flew off strongly, and then a second male.  Next, we lost Ivy for several minutes as she pointed and held a grouse.  An hour or so later and almost back to the parking lot, I started to despair of finding a brood when Ivy struck this point.  Tom and I tip-toed around Ivy searching for the hen, their camouflage blending them in with the leaf liter on the woods floor. Finally, I spotted the bird a couple of yards off Ivy's left shoulder.

Tom flushed the woodcock and grabbed Ivy, and the bird flew off uncertainly about ten yards. "That's probably a brooding hen," Tom said after he threw down his hat to mark the spot of the flush and tied Ivy to a tree.  We tip-toed around even more carefully so as not to step on any chicks when one little bumblebee-like chick made a run for it. "Grab it," Tom said, and I did ever so carefully, handling my first ever woodcock chick.  It was a bit smaller than a tennis ball, weighed about as much as an envelope and was quite tame once I cupped it in my hands. Tom held out a small mesh bag, and I dropped the chick in.  It took us several more minutes to find the rest of the brood.  Woodcock lay four eggs, so we had three more to go. We found the next chick right away, then another several minutes later and placed those in the mesh bag with the first captured.  We looked and looked and looked for the fourth, for maybe ten minutes, but never found it.  As we searched, the hen was making a small racket ten yards away, while Ivy was whining tied up to her tree. 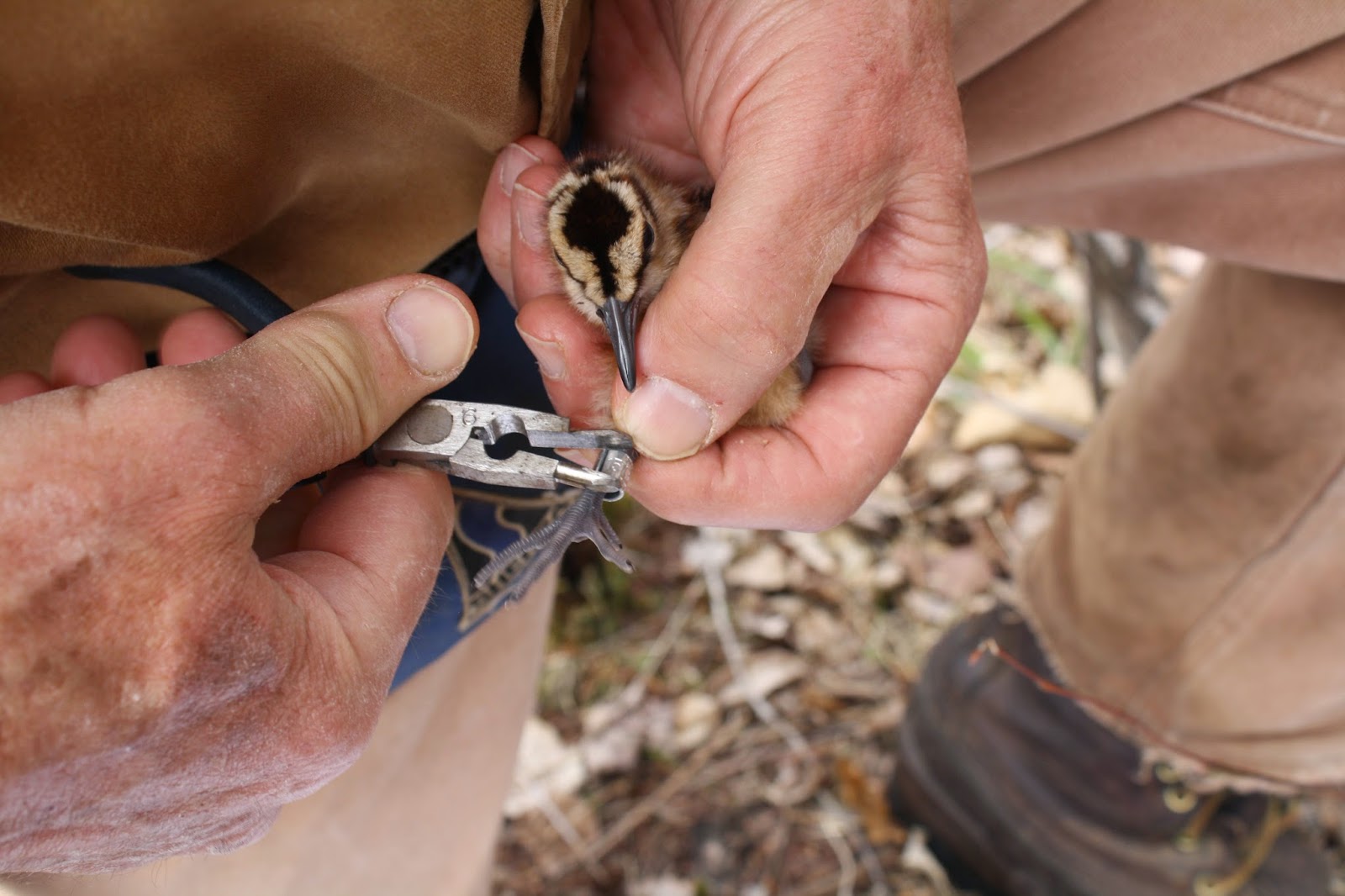 The real work began.  Singly, we pulled each of the chicks out of the bag, measured their bills and placed a small aluminum band on a leg.  Their bills were 15 mm long, which Tom said meant they were about a day old.  Beaks grow two mm per day so measuring them is a reliable gauge of their age.  Since the chicks were so docile, the operation went smoothly.  Open up the band with the banding pliers, slip it over a leg, making sure not to pinch a toe, and clamp it down. Transfer banded chick to a second bag and onto the next.  Woodcock chicks are precocious and grow quickly -- in two weeks they can fly and are nearly full-grown in a month's time. 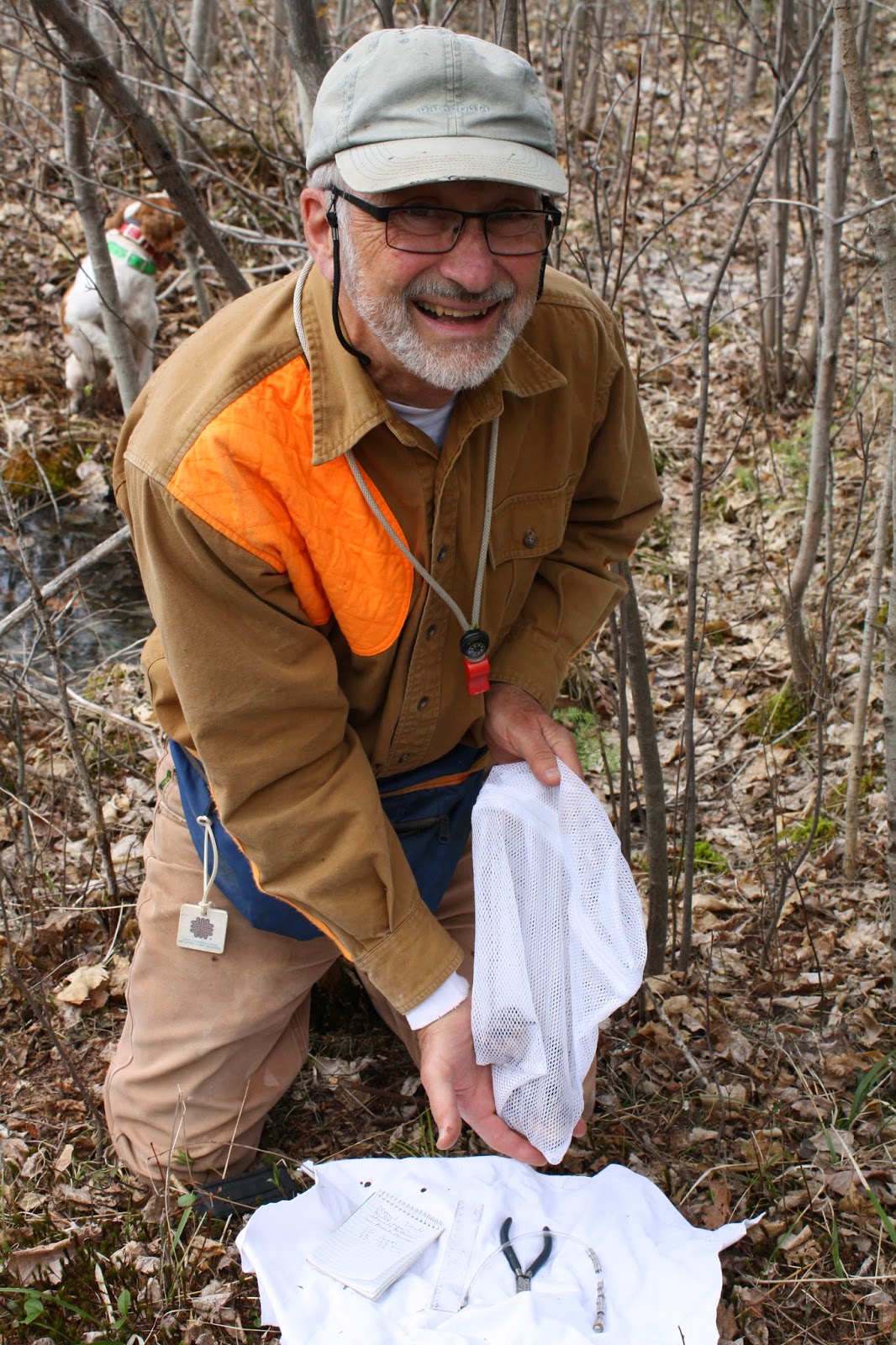 When finished, Tom sculpted a small nest out of leaves where we found the chicks, placed them in the small depression and dropped his hat over the top of them to calm them.  We untied Ivy, Tom grabbed his gear and his hat and we quickly made our exit.  It was an efficient operation, hopefully someday yielding information to the USFWS if a band is recovered, to help us understand why woodcock populations are declining.
Posted by Unknown at 7:25 AM No comments: