The Raspberries Have Ripened 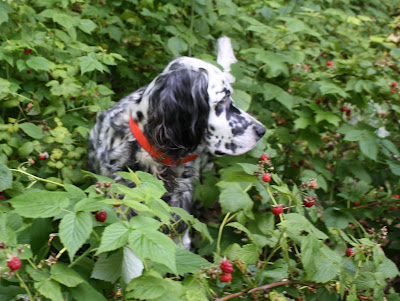 Here's Fergus is our berry patch going after raspberries like a black bear.  He and Jenkins have made paths through the jungle of vines in their quest for fruit.  They seem to find the berries by smell rather than sight, judging from all the snorting and snuffing they do when they pick berries.  Dogs only have two color-detecting cones in their retinas, unlike humans who have three, so apparently red looks more like brown to them.

The blackberries and blueberries will follow the raspberries and in turn ripen, and before we know it fall will be here.  Grouse season opens here in Wisconsin on September 12.  We have less than two months to get ready.
Posted by Unknown at 6:28 AM