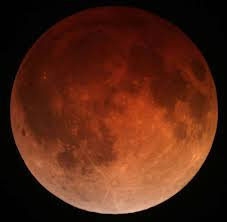 Last night's lunar eclipse was a beauty, and it would have made a memorable woodcock moon had it occurred in October.  I wish it were the woodcock moon, bringing with it thousands of flight birds since so far this season I'm having difficulty locating woodcock other than those I helped band this spring.  I've trained the dogs a few times on those birds, but I can't shoot them.  It would be like shooting a pet.  Plus, doing so would skew the science and research the banding provides.

I'm wondering if the warm weather has moved the woodcock around some since they don't seem to be in my usual hot spots.  As I write, a cold front is sweeping through Wisconsin, and it's supposed to bring us back to autumn, so I'm hoping the woodcock hunting picks up.

On the other hand, I'm finding good numbers of grouse.  Since it's been unseasonably warm this season so far (the warmest September I can remember in my 25 years of grouse and woodcock hunting), I've limited the length of my hunts, getting out for an hour or so in the morning.  After an hour, Fergus and Jenkins are panting and gasping and looking for the nearest muck hole to wallow in.  One cool morning, Jenkins and I did get out for a two and a half hour jaunt and put up 14 grouse.  After he bumped the first one and I corrected him, he was spot on with several fine points the rest of the morning.  Perhaps last night's full moon/eclipse was the grouse moon.

For more on the woodcock moon, see the article I wrote in the Fall issue of the Ruffed Grouse Society magazine.
Posted by Unknown at 8:56 AM