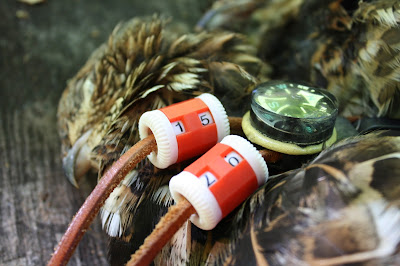 Monday a cold front blew through Wisconsin, dragging with it some cool Canadian air. According to the National Weather Service, September of 2015 went down as the 5th warmest on record.  It felt more like July or August, so we kept our hunts short in whatever cool the early morning or evening offered.  Fergus would flop on his side after a half an hour of hard running and pant in a panic.  Both dogs would wallow in whatever muck they could find.

But that all changed on Tuesday when I had a good hunt with Jenkins, and this morning when I jumped out of the truck with Fergus, it was 36 degrees.  The frost was heavy and the trees dripping as they warmed.  Speaking of trees, the popples are finally starting to drop their leaves, but it's still pretty thick out there.  We had our best hunt of the season, putting up 15 grouse and 7 woodcock.

We had one strange flush this morning.  Fergus went on point in some tag alders about 10 yards from a creek.  I waded in, flushed a bird over the creek, shot and missed.  Two more birds came up, one squealing.  It was a wood duck joining the fun with another grouse.  I pulled off the duck and fired at the grouse and somehow it went down.  Lucky shot.  Ferg was on it quickly, and we had our first bird of the day.
October feels like October, and life is good.