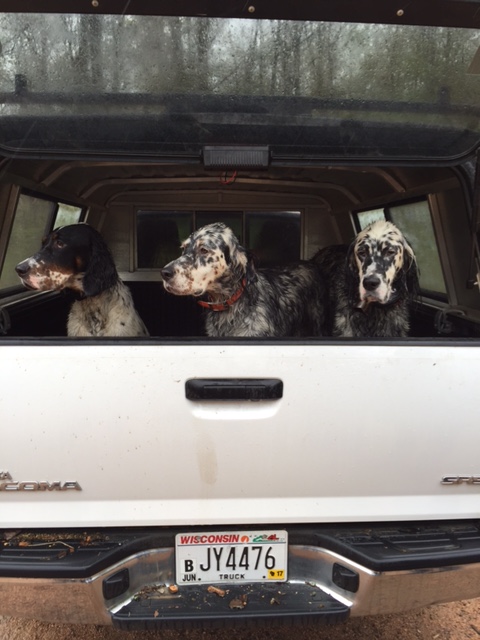 Here's left-to-right Sheffield, Jenkins and Fergus after a run in the wet woods on Wednesday.  Sheffield is my wife's niece's (Laurel) new pup. Laurel and her mom, Cindy, were up this week for a short visit and brought along the seven-month-old setter pup.  My first thought was he looked like Ox, our first setter, with his dark head, who died almost a decade ago.  We later checked Sheffield's pedigree -- he was out of Round River Kennels in Burlington, Iowa -- and found to my surprise Alderwood Hope and Alderwood Black Jack in his blood.  Hope was Ox's mom and Black Jack his grandfather.  So of course I had an even softer spot for Sheffield. 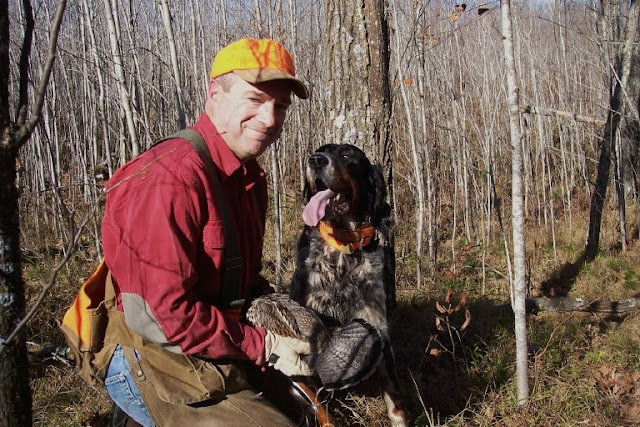 Ox, my first real bird dog, got me addicted to grouse hunting.  He and Dan Pempek of Alderwood Kennels taught me a lot about grouse hunting.  He's pictured here above with my brother Matt in a northwestern Wisconsin covert.  Just before this photo was taken he had pointed a black bear hibernating in the open, which fortunately ended well with the bear lumbering off.  Ox was 80 pounds plus and wished every day was October.  It warmed my heart to know his blood is still flowing, his genes still coursing through the woods and across fields.
Posted by Unknown at 8:36 AM No comments: 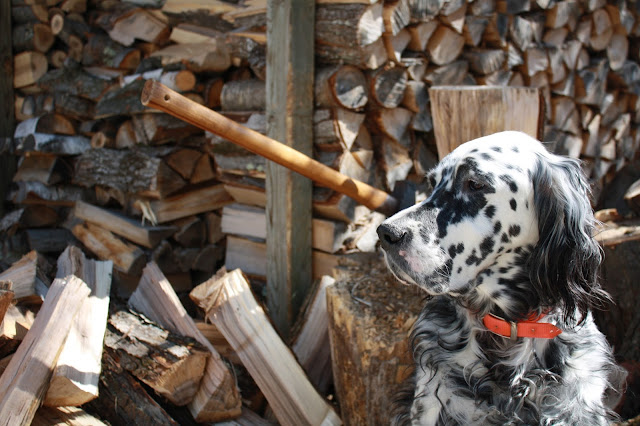 In  Aldo Leopold's essay "Axe-in-Hand", he discusses our plant biases, particularly which trees we want to keep and those we want to cut.  Leopold writes, "The wielder of an axe (chainsaw in this age) has an many biases as there are species of trees on his farm."  Leopold goes on to list some of his. He admitted that the popple (aspen) was in "good repute because he glorifies October and he feeds my grouse in winter, but to some of my neighbors he is a mere weed."  He also preferred tamarack "because he sprinkles gold on October grouse (gunpowder bias)."  Leopold had a soft spot for brush, like the prickly ash where his woodcock took "their daily sunbath under the shelter of his thorns" and the hazel because the catkins fed his deer and grouse.

Leopold wrapped up the essay by noting that our plant biases not just our vocations but also our avocations.  Our biases are a reflection of what we value, what we prefer and what we do, what Leopold called "our manner of wasting weekends."  He preferred to waste his weekends in November with his axe in hand.

A friend of mine who owns 80 acres adjacent to county forest land has an overwhelming deer bias and cuts many of his large trees, often sugar maples, to grow the brush deer love.  He can't use all the firewood and generously lets me take what I can use.  Now I have a maple syrup bias and have a difficult time cutting maples, even my friend's.  On the other hand, his bias keeps me in firewood.

The grouse don't seem to mind his bias either.  This morning as I was sizing up a maple, deciding which way to fell it, I looked over at Fergus who was immobile 20 yards away.  "Hmm, he looks like he's on point."  I looked back up into the crown of the tree to cipher which way it was leaning, and when I looked back over at Fergus, it really sunk in that he was pointing.  I took a few steps in his direction, and a big gray grouse busted out from beneath a balsam fir and flew clattering through the brush.  Like Leopold, I have a grouse bias and love all the plants that feed and shelter grouse.  Well, maybe all of them except tag alders.

Posted by Unknown at 9:11 AM No comments: