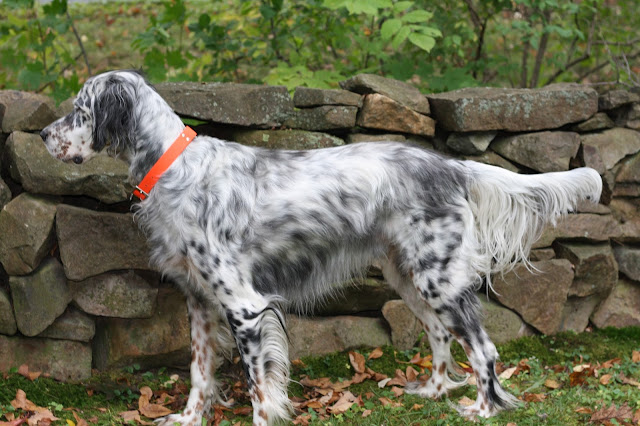 It's been pretty tough getting shots this season so far -- both with a shotgun and a camera.  Seems to be good numbers of birds in northern Wisconsin, grouse and woodcock, but I've been mostly hearing them rather than seeing them.  I did get one good look at a grouse last week that flushed simultaneously with a woodcock.  It crossed right to left in front of me in fairly open woods after it flushed out of a mix of popple and hazelnut.  I saw it so well I could see the mottled breast feathers as the bird banked in front of me.  Most of the birds, however, are disappearing into what Susan calls the Green Curtain.

Camera work is also difficult this time of year with all of the brush between the dog and the lens. Many shots seem like nothing but a green blur.  I couldn't help myself a few days ago when Jenkins locked up on a chipmunk in our front yard.  I ran in the house, grabbed the camera and snapped a few shots. Looks sort of like a classic New England shot in an old abandoned apple orchard -- but I know there's a rodent on the other end of this point.

The good news is a few leaves are starting to spin off the trees.  Things will open up out there shortly. A little frost, a little wind, and the trees will be stripped bare.
Posted by Unknown at 11:02 AM