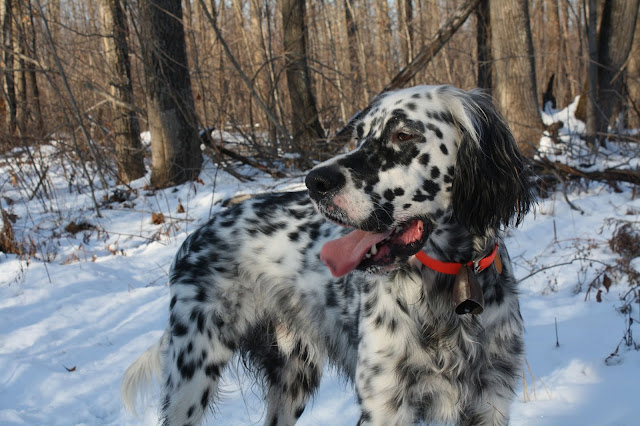 First of all, Fergus (above) is pissed.  He doesn't like it at all.  "What, no December grouse hunting...."

If you haven't heard the Wisconsin Natural Resources Board is considering the unprecedented move of closing the ruffed grouse season on November 30, lopping off two months.  They're concerned about the unusually low 2018 drumming counts as well as the low harvest rate from the 2017 season.  The NRB votes on this proposal August 8 and you can comment until noon on August 3.  E-mail comments to Laurie Ross, the NRB liaison at laurie.ross@wisconsin.gov or call at 608-267-7420.

Here's the e-mail I sent the NRB if you care to read it:

I understand the board's desire and duty to protect ruffed grouse by shortening the season to November 30.  I, too, would do all I could to protect our grouse population for I cannot imagine Wisconsin without the bird drumming in the spring or hunting them in the fall.

The low drumming counts this past spring and the low harvest rate last fall have mystified and worried hunters, wildlife managers, policy makers -- anyone who cares about ruffed grouse.  We need more research on ruffed grouse to begin to understand these trends, and even more critically, we need quality habitat.  That's the key -- I found some excellent cover last year (Sawyer, Bayfield and Washburn counties) and saw a lot of birds.  In fact, I was surprised to hear hunters were seeing and shooting low numbers.

I will follow whatever decision the NRB makes, but a December 31 closure seems more rational to me.  If we believe that hunting is mostly compensatory and not additive predation, then an early closure will not greatly affect overall populations.  My records of 25 years of grouse hunting show I kill a few birds in December -- when the snow isn't knee deep -- and precious few in January,  We should shut down the entire season if we think hunting is causing the decline in the population.

Admittedly, part of my reaction to this is self-centered.  For the last 25 years, I have established a tradition of hunting grouse on Christmas Eve or Christmas Day.  I typically don't get a bird -- it's more to get out in the winter woods and wander around with the dogs.  If the season is shortened, I will no doubt continue my tradition without my shotgun.  And as you know, that isn't the same.

Thank you for considering my thoughts, Mark Parman